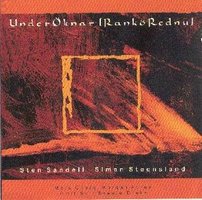 This album is a collaborative album by Simon Steensland and Sten Sandell. Simon Steensland is a Swedish avant-garde artist who had already released several albums prior to this (although this is the earliest I've heard from him thus far); I can't claim to know much about Sten.

It is wrong to say that this is a Simon Steensland album with Sten Sandell guesting, or vice versa; although both were involved in the playing and/or writing of most tracks, there is at least one track each that is written and played by only one of these artists. Also playing on this album are Morgan Agren and Mats Oberg of Mats/Morgan.

Musically, this is an interesting album, but uneven. It starts off strong, the first two tracks (Song and Wrong) featuring the distinctive sound of Simons bass creating the rhythms, which Sten does some rather interesting wordless vocal work over. These two tracks definitely emphasize the vocal work more than the other instruments, but the vocals are interesting enough to deserves the center stage. (They do return later on in the album too, but to my ears these are the best instances of his vocal work here).

For me, nothing else on the album is quite as interesting or accessible as the first two tracks, which is a shame. The music is enjoyable, great sonic textures and playing, but at times it can sit on the repetitive side of things. This is definitely music that warrants several listens for the various textures to have time to sink in. And they are definitely the leading elements here.

To get the most out of this album, you must truly listen to it - leaving it playing in the background will cause you to miss a lot of the details that make the music interesting. Each note is carefully placed to build the mood and atmosphere of the music. Unfortunately, towards the end (around "7/8 + 3/4"), the album starts to drag. Still, there's lots to enjoy, especially for fans of Simons music, for his fingerprints are all over. Although it is also the least "immediate" of his works I have heard thus far.

Michael ondaatje says, "It is as though the surface were underlain with steam pipes with thousands of orifices through which tiny jets of steam are puffing out. The sand leaps in little spurts and whirls. Inch by inch the disturbance rises as the wind increases its force. It seems as though the whole surface of the desert were rising in obedience to upthrusting force beneath. Larger pebbles strike against the shins, the knees, the thighs. The sand-grains climb the body till it strikes the face and goes over the head. The sky is shut out, all but the nearest objects fade from view, the universe is filled.

Well………. I think you could listen for yourself. I recommend this for the jaded new-audiophile. canary burton, alternate music press, usa