Born a very long time ago. In sweden. I vividly remember how i (in faded monochrome) baby-sat both strindberg and wagner, as well as mark twain. Oh, my summers with good old huck finn on the mighty mississippi…

Professional composer/musician since 1991. My albums are by all means a kind of  "hobby-activity" since i never got any money from neither of them.  In sweden i´m a "well-known" composer, mostly of theatre-music.

However, in the rest of the world, if any one knows about me, it should be from my albums. Those people haven´t listened to my professional music,  and the people that hires me in sweden haven´t really heard my hobby music. The albums. I don´t know if that´s a good thing or not so good. It´s like two different worlds.

But to me both worlds are very present and equally important. They are of course just two sides of the same desire, but still it can hurt when they occasionally collide in my head. It´s like being your own evil twin. Fortunately enough my forehead is very thick.

Instead, the two sides benefits from each other. I steal from myself as often as i like to.

See me in court…

I don't consider myself to be an especially musical or gifted person, and certainly not skilled.

After many years, and millions of hours practicing on the drums, and then later the bass guitar, i sadly found out that i just didn´t have

the talent myself to be any "good".

So let´s be pragmatic then...

SO what i can do pretty good i think, is to hear what music really sounds like. At least to my ears…

And knowing what i want to hear and how to achieve that. And that goes for my playing as well. I´m a horrible instrumentalist (or even musician) by "normal" standards. Fine by me.

As long as i can make it sound good to my ears with my limited skills, i´m fine. I don´t think you

actually HAVE to be "good" at playing, to be able to play fantastic music. To quote our good friend guy segers:

"you have to know why you are there"!

That´s what it´s all about, no matter if you play with frank zappa or "the glue sniffing chainsaw squad". Or even britney spears.

You have to know why you are there!

Terry bozzio would  just be a laughing stock if  you with a time-machine sent him and his 500 tom drumkit back to record alice cooper´s first albums.

Jaco pastorious would make a fool of himself, and got his ass kicked in judas priest. And just maybe ringo starr isn´t the most obvious/ultimate choice for replacing the drum-chair in meshuggah… But damn, i really would like to hear that audition!

I have not so few times over the years had the priviliege to make orchestras out of people who have no musical background or training at all. People who never even have hold an instrument in their hands, and many of those orchestras turned out to be absolutely fantastic! As soon as they understood  "why they were there" things start to happen. I recently wrote hard/difficult music for 6 actors to be performed on 14 pianos and one pump-organ,

and in many ways i wish that the result had been properly recorded and released. Just great music, and nothing else.

Obviously i DO admire true musician-ship and spectacular playing by fantastic performers, but that not happens to be who i am. Still i´m very lucky to know many absolutely fantastic instrumentalists and musicians, and i´m fortuned enough to have them playing my music. For that i´m more grateful than i could possibly express.

I have no musical education at all what so ever, and that is something i´m VERY happy about.

I don´t want to be too familiar with music. I want to find out how a chord sounds if i press maybe that key. Or that black one… I prefer to invent each chord every time i sit down with an instrument. With my "learning by doing" (and then forget asap) strategy, i´m forced to use nothing but my ears when i compose since i have nothing else to fall back on. I can´t play "stairway to heaven" on any instrument. To me ignorance is bliss  in many ways.

I´ve met and played with quite a few very well educated and supposedly GOOD musicians over the years, who told me that they can´t play my music since there´s no "real" chords (or even melodies) in it. Good for them, but to me, my chords are just as real as any other. They just might be a little more difficult to name… But since i´m a punk-rocker, i don´t name chords.

Let me just say that i have nothing against education, knowledge or theoretical skills and so on, it´s just not what i want to do. I also happen to know many musicians who ARE trained "properly", and still are fantastic musicians!

The truth is NOT out there… It´s inside. 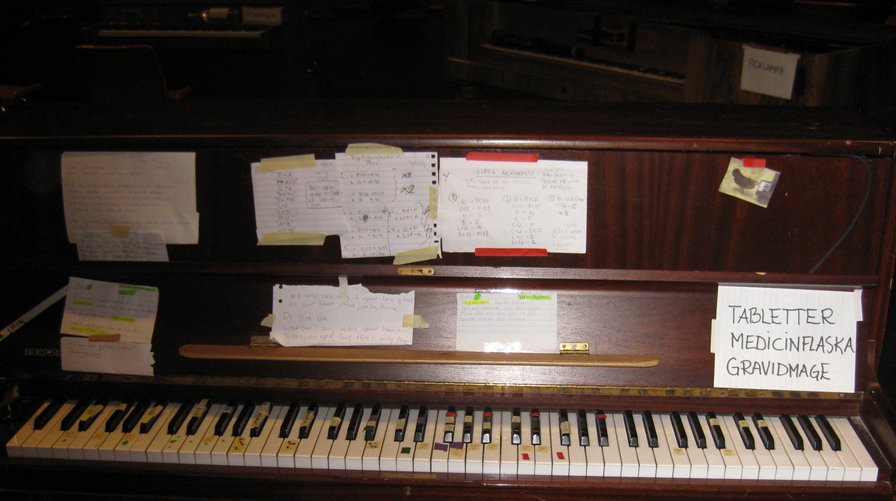 Here´s how a properly trained professional  artist`s instrument of choice suppose to look like from behind.